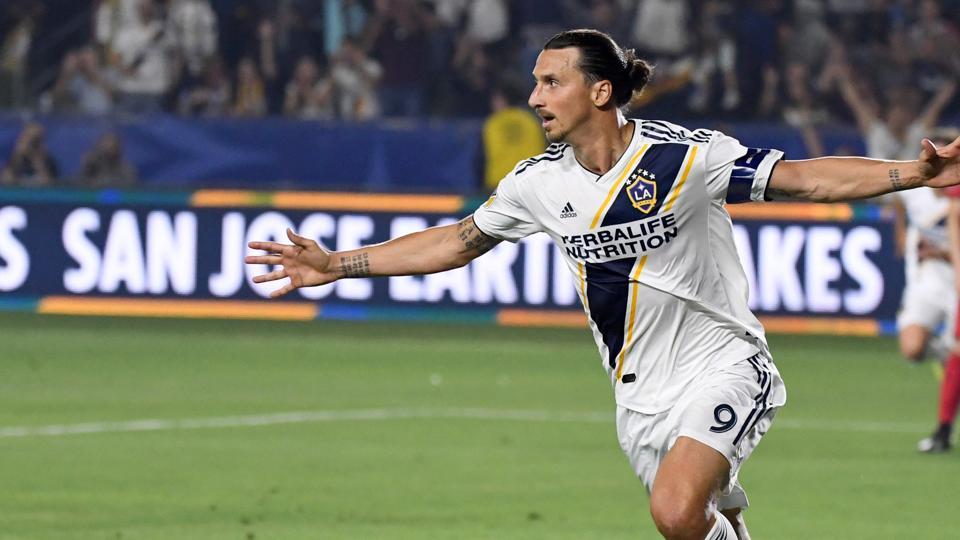 Ole Gunnar Solskjaer has laughed off the idea that Zlatan Ibrahimovic could make a shock return to Manchester United. Ibrahimovic will be out of contract at LA Galaxy in November, once the MLS season has ended, and stated in an interview earlier this week that he would be open to a return. Romelu Lukaku was sold to Inter Milan, while Alexis Sanchez has joined the Italian club on loan for the rest of the season, and Solskjaer has openly admitted that United are now short in attack.

Ibrahimovic spent 18 months at Old Trafford under previous manager Jose Mourinho and scored 28 goals in his first season in 2016/17. However, he then suffered a cruciate knee ligament injury and failed to recover his place in the side after Lukaku’s arrival, triggering his 2018 move to LA .

“If Zlatan was 28 at his next birthday, not 38, then maybe,” said Solskjaer. “So that is a big difference. “Zlatan had a great time here and he is still doing well. It was just unfortunate that he got his injury.

“I don’t think it will happen. I think he had his time at the club and he has had a fantastic career at the club. “But he knows my number and if he is serious, I will always speak to Zlatan.”

Solskjaer will have to rely on a forward line of Anthony Martial, Marcus Rashford and 17-year-old Mason Greenwood for goals before the transfer window opens again in January. But despite the lack of experience in that trio, the Norwegian believes it was the right decision to send Sanchez out on loan to Inter for the season. The Chilean forward has had a nightmare spell at United, scoring just five times in 45 appearances since his move from Arsenal in January 2018.

“Alexis needed to go,” explained the United manager. “We know he has been here for 18 months and it has not really worked out for him. “For him to restart and get himself playing regularly and scoring goals, that will only benefit everyone in the end.

“We had a decision to make. I am trusting Anthony, Marcus and Mason to be our centre forwards.

“For me, it’s time for our boys to feel that pressure and responsibility, to be more robust and to know they have to play five games in a row. “We’re mentally and physically more ready. That is the next step for our younger players.”

However, Martial will miss Saturday’s trip to Southampton due to injury, while Luke Shaw will be out for a few weeks due to a hamstring problem. As the transfer window shuts across Europe on Monday, there is also likely to be further movement out of United.

Chris Smalling is on the verge of sealing a season-long loan to Italian giants Roma, and there could be a return to Serie A for Matteo Darmian. “This opportunity has come up in the last couple of days for Chris,” said Solskjaer. “We sat down and discussed it and at the moment we have six fit centre-backs.

“I couldn’t promise Chris regular football, so he is on the plane over there now.

“I think he will enjoy the experience. It’s a big club, a good league and he will come back stronger and fitter from it.

“I can see Matteo maybe going as there has been some interest in Italy. But Marcos Rojo is definitely staying.

“The squad is less in numbers but we are still big enough and strong enough to have coverage in all positions.”