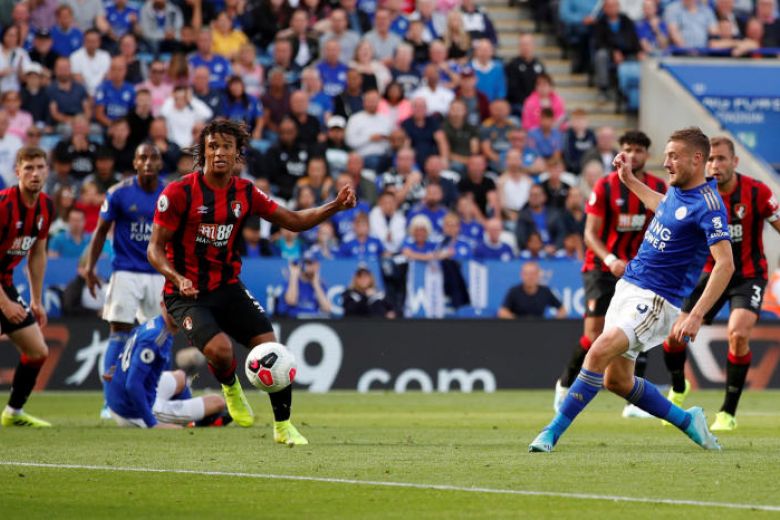 LEICESTER (REUTERS) – Leicester City striker Jamie Vardy was involved in all three goals as Brendan Rodgers’ side beat Bournemouth 3-1 in an end-to-end contest at the King Power Stadium in the Premier League on Saturday.

Leicester, who were industrious both on and off the ball against the visitors, move provisionally up to third in the table with eight points after four games.

“We were worthy winners I felt,” Rodgers said. “I’m so, so proud of them. They gave so much against a very good side.

“Vardy is a top-class striker. From the day I walked though the door he’s been amazing. It was a difficult (first) goal today… on the bounce, his connection and finish.”

Vardy opened the scoring in the 12th minute when he took advantage of Bournemouth’s high line to break the offside trap and latch onto Ben Chilwell’s long ball, lobbing the ball over goalkeeper Aaron Ramsdale who was caught in no man’s land.

But the hosts’ lead lasted only three minutes after Bournemouth’s Ryan Fraser slipped the ball through to find striker Callum Wilson, whose shot from an acute angle beat Kasper Schmeichel and trickled into the goal at the far post.

Vardy then turned provider for Leicester’s second, beating Steve Cook on the right side of the box on the dribble before playing the ball across goal for midfielder Youri Tielemans who restored the lead with a simple tap-in.

In the second half, Leicester had a heart-in-the-mouth moment when VAR checked to see if Tielemans deserved to be sent off for a rash and potentially leg-breaking challenge on Callum Wilson but the review did not produce a decision.

Bournemouth thought they had a penalty in the 69th minute when Wilson went down in the box under pressure from Leicester defender Caglar Soyuncu but the referee waved it away and booked Wilson for simulation.

Leicester’s persistence paid off when James Maddison nicked the ball off the Bournemouth back line and the ball fell to Tielemans, whose pass back into the box was taken first time by Vardy to make it 3-1.

“There were bits in the first half we were pleased with,” Bournemouth boss Eddie Howe told BBC.

“The goals killed us, from the first to the third. We’ve gifted them goals, it gave us a mountain to climb.”

Dominic Solanke forced a save from Schmeichel with a swerving effort from range that dipped late while Demarai Gray’s solo run at the other end in stoppage time nearly produced a fourth before Cook stepped in to block his effort.

Leicester travel to Manchester United in the next round of fixtures after the international break while Bournemouth host Everton.