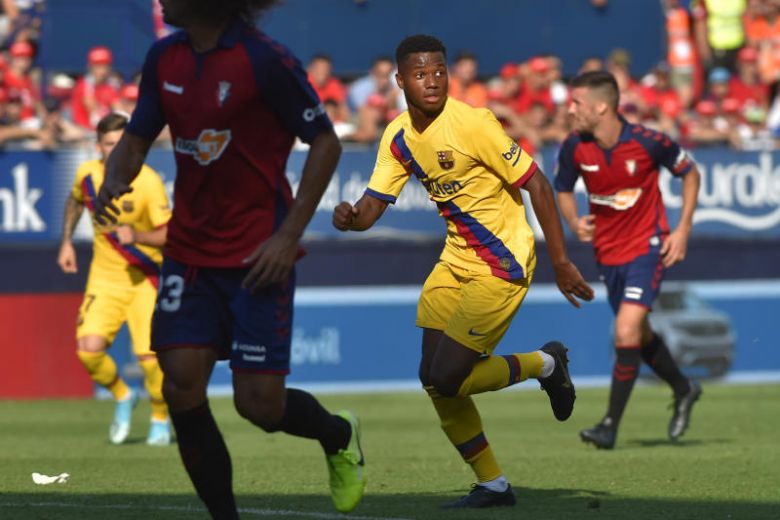 PAMPLONA, SPAIN (REUTERS) – Sixteen-year-old Ansu Fati became Barcelona’s youngest ever La Liga goalscorer on Saturday (Aug 31) but could not prevent his side stumbling to a surprise 2-2 draw at promoted Osasuna which left the champions with only four points after three games.

Roberto Torres’ thumping volley gave Osasuna the lead in the seventh minute to send the boisterous El Sadar crowd into a frenzy and Barca struggled to cope with the home side in a first half in which they failed to have a single shot at goal.

Barca were still without all-time top scorer Lionel Messi and fellow forwards Luis Suarez and Ousmane Dembele due to injury and coach Ernesto Valverde was left with little choice but to turn to Fati at the start of the second period.

The teenager had become Barca’s second-youngest ever player in last week’s 5-2 win at Real Betis and he needed only six minutes to get off the mark, rising to head home a cross from fellow academy graduate Carles Perez.

Perez also provided the pass which led to Arthur Melo giving Barca the lead in the 64th minute by brushing off two defenders inside the area before delivering a superb strike into the bottom corner.

But even when they were in front, Barca looked far from comfortable against an Osasuna side renowned for their physical prowess and who are unbeaten at El Sadar in league games since April 2018.

Forward Brandon should have equalised for the hosts when he was unmarked in the area and got his head on a cross but missed the target, while substitute Juan Villar was thwarted by Barca goalkeeper Marc-Andre ter Stegen a minute after coming on.

Osasuna finally found their way back into the game when Gerard Pique was penalised for blocking a cross with his hand and Torres showed nerves of steal to send Ter Stegen the wrong way from the spot to level in the 81st minute.

It is the second consecutive away game which Barca failed to win after losing 1-0 at Athletic Bilbao two weeks ago, while Osasuna have picked up more points than the champions, recording two draws and a victory on their return to Spain’s top flight.