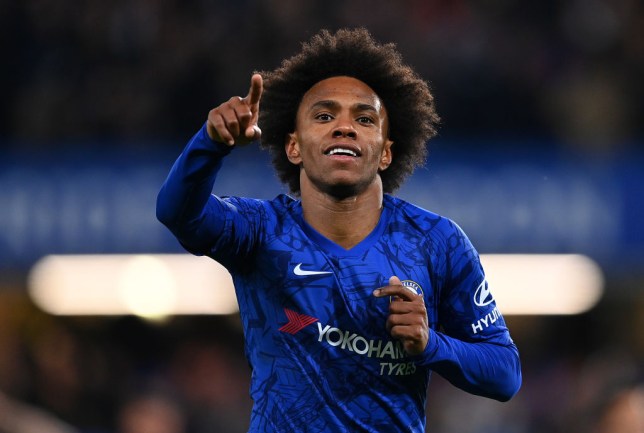 Willian admits he would be open to leaving Chelsea this summer and says he would be ‘fine’ with a move to either Arsenal or Tottenham. The 31-year-old is set to become a free agent this summer as his contract with Chelsea expires at the end of June. Chelsea have offered a new two-year deal but Willian is holding out for a three-year contract. In an interview with Brazillian YouTube channel ‘Desimpedidos’, Willian was asked directly about the prospect of moving to either Arsenal or Tottenham once his contract with Chelsea ends. ‘It really is a hard decision,’ said the winger. ‘I identified myself a lot at Chelsea, I have a lot of love for everyone at the club, and the fans.

Willian has been unable to reach a new agreement with Chelsea (Getty Images) ‘However, it is like I said before, if I leave Chelsea with no trouble and leaving the doors open, it would be fine to move to a rival club.’ Asked if he will stay in London, Willian replied: ‘I don’t know. I like London and so does my family. ‘However, this is a question that I still don’t know the answer, if I will stay at Chelsea, move to another team from London, or leave England.’ Willian also denied that he intentionally linked himself with a move to Arsenal after his family dressed in red and released the video on social media.