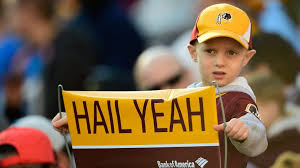 The Washington NFL franchise, 10 days after announcing that a “thorough review” of its name will be conducted, has made a preliminary decision.

At the end of the current review, the old name will be retired.

“On July 3rd, we announced the commencement of a thorough review of the team’s name,” the franchise announced in a statement. “That review has begun in earnest. As part of this process, we want to keep our sponsors, fans and community apprised of our thinking as we go forward.

“Today, we are announcing we will be retiring the [current] name and logo upon completion of this review.”

In other words, the name remains in place until the review has completed and a new name has been revealed.

“Dan Snyder and Ron Rivera are working closely to develop a new name and design approach that will enhance the standing of our proud, tradition rich franchise that inspires our sponsors, fans and community for the next 100 years.”

For now, the message is this: The new name will be gone, but for now it will remain. It’s an awkward needle to thread for the team, since today’s announcement makes it clear that the name must go. It’s simply not a sustainable approach, and it points to a new name being selected ASAP, presumably once the team does what it should have already done — secures the appropriate trademark protections for the new name and logo.

There’s still no reason to keep the current name while the next name is picked. Frankly, it feels like one final act of defiance by Snyder, even as he realizes that the clock has finally struck all-caps NEVER.