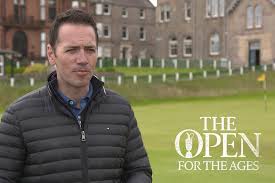 Nick Dougherty, Ewen Murray and Iona Stephen have each spoken of their pride at being part of the commentary team for The Open For The Ages, with the former describing the event as “the stuff that dreams are made of.”

The Open For The Ages, in association with HSBC, will see real footage from past Championships at St Andrews expertly edited and woven together with modern graphics in a bid to recreate the drama of an Open final round.

Dougherty, Murray and Stephen are among the commentators that will describe the action when this innovative project culminates in a three-hour broadcast starting at 11am BST on Sunday 19 July, available to view on TV, digital and social media channels.

“To be involved with it, to be part of that commentary team, fills me with a lot of pride because it’s a really, really cool production,” said Dougherty.

The greatest Champions from the last 50 years will do battle in The Open For The Ages. A data model developed by NTT DATA, an Official Patron of The Open, will combine the votes of over 10,000 fans with player career statistics to calculate the victorious golfer.

“I think this is a thing that we’ve always dreamt of being able to do, to put the greats of the game over the course of history together against one another,” added three-time European Tour winner Dougherty.

“To be able to reimagine and create this fantasy world where we can pit them against each other, alongside each other at The Old Course. It’s the stuff that dreams are made of.

“To see them there and watch them in their prime, and look at the comparison between the golf swings and how they evolved, it was a lot of fun. And I think one of the wonderful things about this whole production is we get to celebrate the lost footage, so to speak, of The Open.”

Fellow commentator Murray, a participant in The Open at St Andrews in 1978 and 1984, added: “It was something I didn’t think was possible. I now know it is possible.

“I really enjoyed (commentating on it) – for me, it was a labour of love. It was an honour to do, to be perfectly honest.”

“There is nothing like The Open at St Andrews.”EWEN MURRAY

Stephen, who studied at the University of St Andrews before taking up golf professionally, soon found herself drawn in by the footage showing players from different eras competing together.

“I was fully convinced that these matches were taking place and they were all in the same field and it was just very exciting,” she said. “To have the opportunity to see all these players on the same turf at one time (in the final broadcast), it’s gonna be amazing.”

The choice of venue makes The Open For The Ages extra special for Murray.

“I was brought up in that part of the world, just a little to the south of St Andrews, so I knew St Andrews very well, I went to my first Open there as a nine-year-old in 1964,” he explained.

“It’s an astonishing place. I think when you’ve played in The Open Championship at St Andrews, there’s something that gets under your skin and stays there, and thankfully it does.”

Tiger Woods: Change is how we grow as a society, but not at cost of innocent lives
Jon Rahm finds spark in deciding to ‘just go for it’ last Sunday