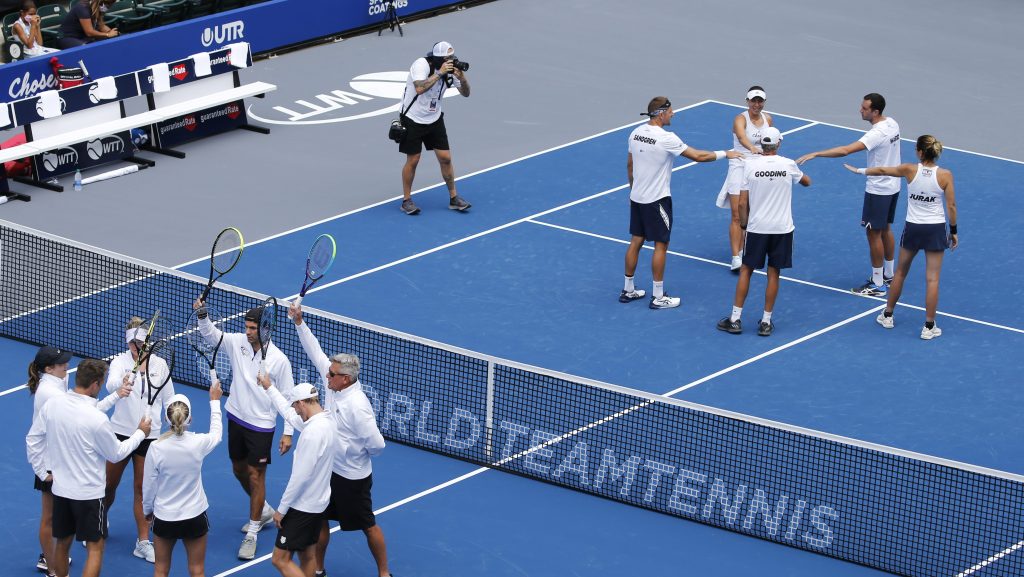 WHITE SULPHUR SPRINGS, W.Va. — Tennys Sandgren celebrated a game-clinching point in pandemic-appropriate fashion, retrieving the ball himself in the absence of ball kids, and exchanging an awkward fist-to-elbow bump with a teammate as the World TeamTennis season started before mask-wearing fans on Sunday.

WTT’s nine teams have come together at The Greenbrier resort in West Virginia for their three-week season. Matches normally are played at various sites around the country but everyone was brought to one location because of the coronavirus pandemic.

Sandgren, for one, was happy to be at The Greenbrier, and not just for the tennis.

“You know what it’s been like the last four months,” he said. “You’ve been sitting in your house the whole damn time. I get to do it in a beautiful setting now. It’s fantastic. There’s lots of stuff to do.”

For Sandgren, that includes playing golf and hanging out at the pool.

“It’s been pretty chill,” he said.

Tennis became one of the few professional sports to welcome fans back so far during the pandemic. An indoor bull riding event was held Friday in Sioux Falls, South Dakota, as well as a weekend IndyCar doubleheader with limited spectators at Road America in Elkhart Lake, Wisconsin.

“It was awesome to have some people out there to get behind the tennis,” Sandgren said. “It made hitting good shots a little more fun.”

Last month, top-ranked Novak Djokovic played in a series of exhibition matches he organized in Serbia and Croatia with fans in the stands and zero social distancing amid the pandemic. He later announced that both he and his wife had tested positive for the virus and apologized for contributing to its spread.

The WTT season started just as confirmed coronavirus cases were soaring nationally. In West Virginia alone, positive cases have doubled in the past month, including dozens of cases and three deaths linked to a church not far from the resort.

There were strict measures in place at the matches to ensure health and safety. Anyone who wasn’t a competing athlete wore a mask inside the tennis stadium and fans had their temperatures checked prior to entering. Staggered rows of seats were covered to allow for social distancing.

Up to 500 spectators are being allowed at each of the outdoor matches at the 2,500-seat court, although there were far fewer than 500 in attendance at the opening match. If rain forces play indoors, the maximum capacity will be reduced to 250.

On the court, the chair umpire was helped by electronic line calling instead of line judges. There were no ball kids. The athletes chased down loose balls and tossed them to the serving player. When matches ended, opponents touched tennis rackets – no high-fives or handshakes.

“If it’s safe for the people to get out and experience the tennis live, I’m all for it,” Orlando Storm coach Jay Gooding said. “It’s exciting for us. I think the tennis public in general has something to look forward to.”

Lisa Pace of Raleigh, North Carolina, and her 18-year-old son, Jackson, already were on a repeat vacation to the resort and decided to stay an extra day to take in the WTT’s opening matches. Jackson Pace played on his high school tennis team, and they weren’t apprehensive about being among dozens of people at a public event, albeit outdoors.

“We both play tennis and we love watching it on TV,” Lisa Pace said. “We just wanted to take advantage.”

She was especially eager to see 2017 U.S. Open champion Sloane Stephens and Sandgren, who reached the quarterfinals of this year’s Australian Open.

Besides Stephens, other Grand Slam champions playing at the Greenbrier are Venus Williams, Kim Clijsters, Sofia Kenin and twins Bob and Mike Bryan, who have won 16 Grand Slam doubles titles together.

Players who test positive for the coronavirus during the season will be removed from the league, quarantined and paid only for matches already completed. The pandemic has put a hold on all tennis events sanctioned by the ATP, WTA and International Tennis Federation. WTT is not affiliated with those tours.

The WTT venue is the crown jewel for the Greenbrier’s tennis facility, which was built in 2015. A year later, it was covered in mud after a devastating flood that killed 15 people in the surrounding county.

The resort dates to 1778 and has a 700-room hotel, has hosted presidents and royalty and held a once-secret underground bunker built for Congress in case of nuclear attack during the Cold War.

“For me, the three weeks here is completely fine,” Gooding said.