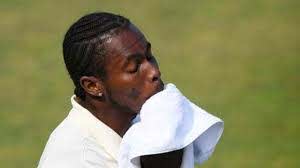 England and Wales Cricket Board (ECB) has taken strict action against fast bowler Jofra Archer for breaching the team’s bio-secure protocols ahead of the second Test against West Indies. ECB informed that it has fined Archer and also issued a written warning to the bowler.

Archer was withdrawn from the squad for the second Test match after he admitted to going home ahead of the match at Old Trafford.

“Following a disciplinary hearing held on Friday evening, 17 July, England cricketer Jofra Archer has been fined an undisclosed amount and received an official written warning after admitting to breaching the team’s bio-secure protocols on Monday 13 July when he made an unauthorised visit to his home in Hove,” ECB’s official statement read.

“Archer was withdrawn from England’s second Test squad against West Indies at Emirates Old Trafford and is commencing five days of isolation at the venue. He will undergo two COVID-19 tests in this period, which have to test negative before his self-isolation period is lifted. He is due to rejoin the rest of the squad on Tuesday 21 July.

“The hearing was chaired by Ashley Giles, Managing Director, England Men’s Cricket and included Archer’s agent and a representative from the Professional Cricketers’ Association,” the statement added further.

England are currently taking on West Indies in the second Test match at Old Trafford. The hosts managed to put up a first innings total in excess of 400 after being put into bat. Opener Dominic Sibley and all-rounder Ben Stokes slammed centuries to help England’s cause.

The first session of the third day was washed out earlier today due to rain with the West Indies stranded on their overnight score of 32/1.