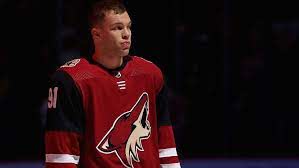 • While he recently had dinner with Coyotes owner Alex Meruelo and COO Xavier Gutierrez, Taylor Hall will still wait until the off-season to hold any contract talks. [Sportsnet]

• The JOFA line is back for the Predators. [Nashville A to Z Sports]

• How Kevin Fiala and Kirill Kaprizov can help one another and the Wild. [Zone Coverage]

• Sheldon Keefe has plenty of options at his disposal to help out Auston Matthews. [TSN]

• CCM Hockey has announced an endorsement agreement with Akim Aliu, founder of the Time to Dream Foundation and co-chair of the newly formed Hockey Diversity Alliance, to work to eradicate racism and intolerance at all levels of hockey. [PR Newswire]

• The Canadiens and Islanders are closer to getting some practice help for Phase 3.

• NHL 21 will be released in October and will not be available on PS5 this year. [Operation Sports]

• The story of the two friends rollerblading from Boston to Michigan to raise money for American Cancer Society. [ESPN]

Sean Leahy is a writer for Pro Hockey Talk on NBC Sports. Drop him a line at phtblog@nbcsports.com or follow him on Twitter @Sean_Leahy.