Russell Westbrook ‘thankful and blessed’ to return to Houston practice 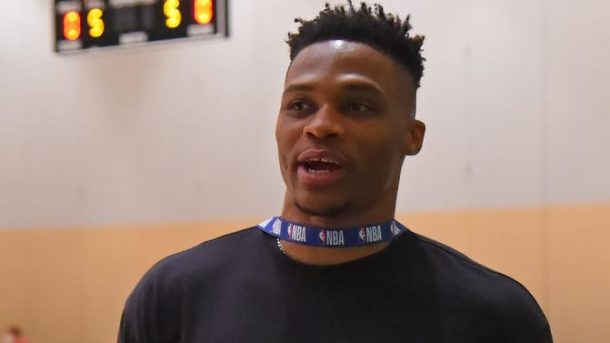 Russell Westbrook said he was saying he was “thankful and blessed” to return to the practice court for the Houston Rockets Wednesday, having recovered from the coronavirus and to be back out there.

He also said before the practice to reporters he just wanted to see if he had the legs under him to still make a layup. Turns out, yes he can.

Westbrook, wearing one of the new “Honor the Gift” shirts his clothing line partnered with the NBPA to create, said the virus did not hit him hard, only a stuffed up nose, via Jonathan Feigen of the Houston Chronicle.

Westbrook said he had no COVID-19 symptoms beyond a stuffy nose. Could not predict how long he will need to be in game shape.

Russell Westbrook said he is “thankful and blessed to be healthy.” Said he is “very eager” to get back on the court.

The Rockets now have both Westbrook and James Harden, who was delayed in arriving in Orlando, in the bubble and ready to compete. Whether Westbrook plays in the Rockets first scrimmage Friday will be up to team doctors, coach Mike D’Antoni said.

The Rockets will have a lot of eyes on them in the restart because of their all-in commitment to small ball — 6’5″ P.J. Tucker will play a lot of center. In the uncertain world of NBA games after an unprecedented break, that unconventional approach could get them upset wins. Or, they could get bounced in the first round.

There is no more high-variance team in Orlando than the Rockets and that — plus Westbrook and Harden — make them must watch.