Kemba Walker back at Celitcs practice, will sit out first scrimmage 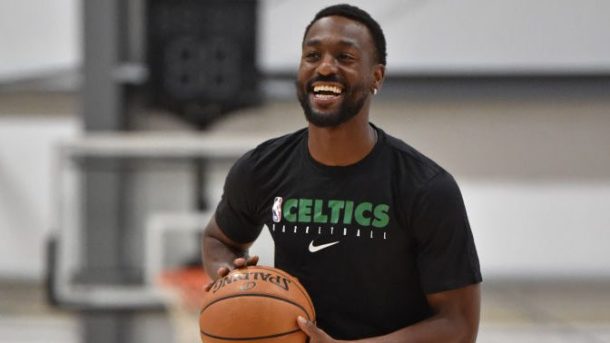 The balky left knee that had Kemba Walker sit out 14 games this season and had Celtics’ coach Brad Stevens taking it slow with his point guard at the NBA’s Orlando restart was not an issue Thursday — Walker was back at practice.

That doesn’t mean he will play in the Celtics first scrimmage on Friday, but Walker said he felt good after going through a full practice Thursday.

#NEBHInjuryReport Kemba says his knee is reacting well while he’s ramping up his workload: “I felt really good (today), actually. It was really fun to get out there with my teammates. The knee feels good. I’m trending upwards.”

Walker said he had no concerns for the rest of this restart about his knee, adding “it’s all about maintenance.” Stevens had previously suggested a possible minutes limit for Walker through the seeding games (Boston just needs to not give up 2.5 games to Miami and it maintains the three seed).

Walker averaged 21.2 points and 4.9 assists a game in Boston this season, but for the first time in years was playing as part of an ensemble with Jayson Tatum, Jaylen Brown, and Gordon Hayward all able to go out and get buckets. Walker isn’t in Charlotte anymore where he was all the offense, now he has Tatum developing into a superstar around him. It’s what led Walker to tell his teammates this week this was a title team they just needed to show the world, something Enes Kanter relayed on his podcast (via NBC Sports Boston).

“Actually, we had a [team] meeting and, in the middle of the meeting, [Walker] stepped up and said, ‘Listen, man, we have something really special in this locker room. We are like brothers. So let’s just go out there, let’s compete, have fun, and win this championship. Let’s show the whole world that we can do it.’”

The Celtics with a healthy Walker are the biggest threat in the East to Milwaukee. They bring an athletic and switchable lineup (Walker, Tatum, Brown, Hayward, with Marcus Smart off the bench) that was top five in the league defensively and can score a variety of ways. There is a lot to like if the Celtics can get their rhythm back, if Tatum can keep up the All-NBA level of play he had the last month or so of the season, and if Walker’s knee is healthy.

Which is why him practicing on Thursday was such a good sign.