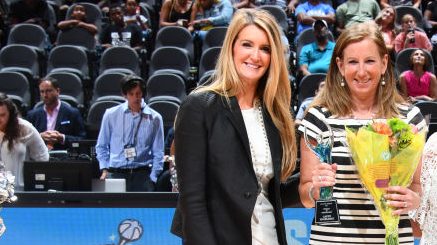 WNBA players are trying to oust Atlanta Dream co-owner Kelly Loeffler, a Republican U.S. Senator from Georgia, because she holds political views they disagree with and is advocating against the league supporting Black Lives Matter.

“The players have always taken a lead here on social justice, and I think as a league we’ve supported and stood by them on the causes that matter the most.”

WNBA Commissioner Cathy Engelbert on the league’s support of the BLM movement pic.twitter.com/wbR5QIXpHx

She has not served as a governor since she became a senator, so since October of 2019. She’s no longer involved in the day-to-day business of the team. And again, we believe the WNBA platform, what the players want to focus on – and I know some of them have spoken out – but they want to focus on getting owners in who otherwise are supporting what they stand for. And that’s what we’re working on.

We are not going to force her to sell her ownership. She is not a current governor. She is not involved in the day-to-day. And we are aware there are interested parties who want to purchase the team.

We’ll see whether that satisfies players.

Remember, the NBA moved to oust Donald Sterling as Clippers owner only after players and sponsors raised sufficient noise. Other owners were content to look past his racism and sexism for many years.

There should be room in the WNBA for opposing viewpoints. Ousting Loeffler – who as Engelbert noted, holds limited power within the league – isn’t necessarily the right answer. The WNBA is moving ahead with its 2020 season dedicated to social justice despite Loeffler’s objections. There is value in listening to conflicting opinions, even if it ultimately doesn’t change the outcome.

But that’s not always how things work. If they are dedicated to getting Loeffler removed, WNBA players can exert more pressure.

Clearly, so far, the league is content with the status quo.