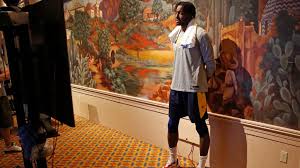 Following discussion of whether players should boycott the NBA resumption, Grant provided a model for using his platform as an active NBA player to advance his agenda. Grant answered every basketball or bubble question during his interview yesterday by mentioning Taylor. By doing so, he steered the questions toward social-justice issues.

Afterward, the Nuggets posted video of the interview with “Arrest the cops who killed Breonna Taylor”:

All 30 NBA teams issued statements in the aftermath of George Floyd’s death. Most were filled with platitudes. The billion-dollar companies wanted to align themselves with causes their customers and employees care about – but not go far enough to scare people.

That’s the organization’s statement. It’s not a quote from Grant, who never uttered those words in that interview.

Kudos to Grant for standing up for a cause he believes in. In just a short interview, he drew a lot of attention to the issue. Getting the Nuggets – worth an estimated $1.6 billion – to tweet “Arrest the cops who killed Breonna Taylor” is a monumental feat.

Taylor was killed in her own home by Louisville police in March. Police were executing a “no-knock” warrant based on the stated suspicion she was aiding her boyfriend, Kenneth Walker, in selling drugs. It’s disputed whether police announced themselves before using a battering ram to enter the apartment. Walker said he and Taylor were asleep when the incident began. Walker, a licensed gun owner, called 911 and fired at what he says he believed to be intruders. The police returned fire, and Taylor was fatally shot.

None of the three officers involved in the shooting – Brett Hankison, Jonathan Mattingly and Myles Cosgrove – have been arrested. Only Hankison was fired.

What happened to Taylor was a travesty, and the injustices are vast.

Crackdowns on drugs have led to extreme state violence. No-knock warrants – and even knock-and-announce warrants executed in the middle of the night – put everyone involved at too much risk. Judges approve warrants with too little oversight.

But the officers at Taylor’s apartment shouldn’t necessarily face criminal charges just for carrying out their jobs as the system called for. Hankison allegedly shot recklessly, and if he did, he should face charges. If any of the three officers did something illegal, they should face charges. But the weight of a failed system shouldn’t fall on the individual officers who follow the rules of that system. The officers were put in an impossible situation – fired upon by someone who very reasonably mistook them for intruders. At that point, the police had some right to defend themselves. Just as Walker had some right to defend himself and Taylor in her own home.

Taylor’s death was a tragedy.

Getting justice for Breonna Taylor goes much higher than arresting these three cops.