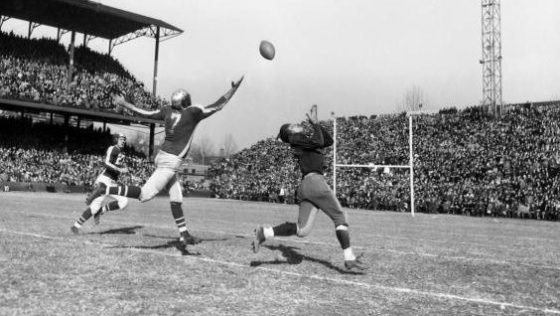 The 101st season of the National Football League could end up being the strangest one since the 24th.

In 1943, World War II caused the league to shrink from 10 to eight teams, and to institute out of necessity one specific rule change that revolutionized the game.

The depleted supply of players due to World War II caused the Cleveland Rams to suspend operations for 1943. It also resulted in the Pittsburgh Steelers and Philadelphia Eagles combining teams.

The Steagles, as chronicled by Ray Didinger of the Eagles’ official website in 2018, split their games between the two cities, with some players living (and working full time as part of the war effort) in Philadelphia and others in Pittsburgh.

“It was done out of necessity,” Steelers founder Art Rooney Sr. said in 1974, via Didinger. “The war was going on and most of the players were in the service. A lot of the coaches, too. We didn’t have the manpower to field a team and neither did the Eagles but we thought we could make it work if we pooled our resources.”

It almost didn’t work, because the coaches of the two teams — Earle “Greasy” Neale in Philadelphia and Walt Kiesling in Pittsburgh — didn’t like each other.

“I thought Greasy was the most stubborn man I ever met until I met Kiesling,” Eagles (and Steagles) tackle Frank “Bucko” Kilroy said, per Didinger. “They didn’t get along at all. The idea was for Greasy to coach the offense and Kiesling to coach the defense, but they spent most of the time fighting with each other. It was actually kind of funny to watch.”

The Steagles went 5-4-1 that year. The Eagles previously had never generated a record above .500.

The Rams returned in 1944, and expansion put the league at 11 teams. To keep the league at an even number, however, the Steelers and the Chicago Cardinals agreed to merge for the season, dropping the league back to 10 teams. Known as the Car-Pits, the combined roster had the rug pulled out from under it in every single game, finishing 0-10.

More relevant to NFL football generally, the reduced availability of players prompted the league to adopt in 1943 a rule permitting free substitution of players. That move laid the foundation for the eventual disappearance of two-way players, allowing for players who played only offense, only defense, and/or only special teams.

The pandemic presents a completely different set of challenges for the NFL. Some of the changes already forced by the worldwide outbreak of COVID-19, and other changes to come, could become as commonplace in the future as the free substitution rule eventually did.