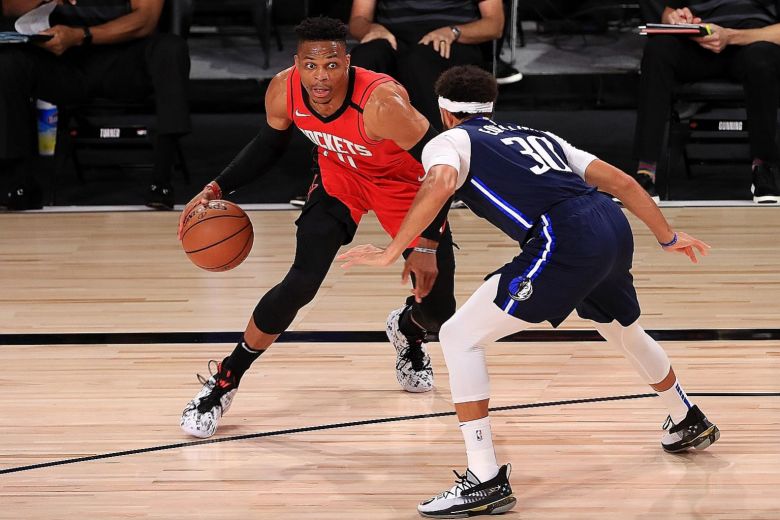 ORLANDO (Florida) • After not playing a competitive National Basketball Association game since March and arriving late for training camp because of a positive Covid-19 test, Friday was a test of Russell Westbrook’s physical capacity.

Not only were his team, the Houston Rockets, pushed to their limits at the ESPN Wide World of Sports Complex in Disney World, but also their opponents, the Dallas Mavericks, threatened to over-run them in the first two quarters.

Their cross-town rivals scored a season-high 85 points by the first half, but their lead was only 10 points, with Westbrook and James Harden keeping Houston in the game.

They had scored a total of 43 points at that point and moved up a gear after the break, contributing an overall 31 points and 49 points respectively, rallying for a 153-149 overtime win.

The Rockets (41-24) claimed the season series with Dallas (40-28) two games to one by finally mustering some defensive might down the stretch of the fourth quarter.

Trailing 139-137, Houston got a tip-in off a Harden-missed free throw from Robert Covington with 3.3 seconds left to force overtime, and Dallas’ Luka Doncic fouled out via an offensive foul with 28.3sec left, his absence at the end was enough to give Houston the win.

Westbrook later told ESPN he had to dig deep, with the 2017 Most Valuable Player (MVP) admitting he was slightly behind in fitness due to his Covid-19 infection.

“It’s tough,” the guard, who also had 11 rebounds and eight assists, said. “To be at home for 18, 19 days, no working out… (I) was a little slow tonight but I’ll definitely be better moving forward.

Harden agreed the Rockets had shown their mettle ahead of the play-offs later this month.

“Our confidence defensively was building, especially in that fourth quarter,” the 2018 MVP, who added nine rebounds and eight assists, said. “We kept pushing the tempo, kept fighting. We kept telling ourselves that we’re built for it. We’re going to play four quarters. We have legs to be able to push through mental toughness.”

It’s tough. To be at home for 18, 19 days, no working out… (I) was a little slow tonight but I’ll definitely be better moving forward.

RUSSELL WESTBROOK, Houston Rockets star, on not playing a competitive game since March and then testing positive.
The Mavericks, however, were left to rue a spectacular failure despite victory seemingly in their hands.

Kristaps Porzingis paced Dallas with 39 points and 16 rebounds, while Doncic recorded a league-leading 15th triple-double of the season with 28 points, 13 rebounds and 10 assists.

Yet their offensive spurt was not enough to get them over the line, leading the team to do some soul-searching afterwards, as they bid to earn a post-season berth for the first time since the 2015-16 season.

“This is a tough loss,” Dallas coach Rick Carlisle said. “This is about as tough as it gets, and it just comes down to basic execution.”

Doncic added: “We’re a young team. We’ve got a lot to learn. We’ll get better for sure. I know we’re going to get together when it matters most, so I’m not worried about that.”

In the other key game of the day, reigning MVP Giannis Antetokounmpo scored 36 points as the league-leading Milwaukee Bucks (54-12) defeated the Boston Celtics 119-112 in their first game since the season was shut down in March owing to Covid-19.

Read the latest on the Covid-19 situation in Singapore and beyond on our dedicated site here.

Get The Straits Times app and receive breaking news alerts and more. Download from the Apple App Store or Google Play Store now.