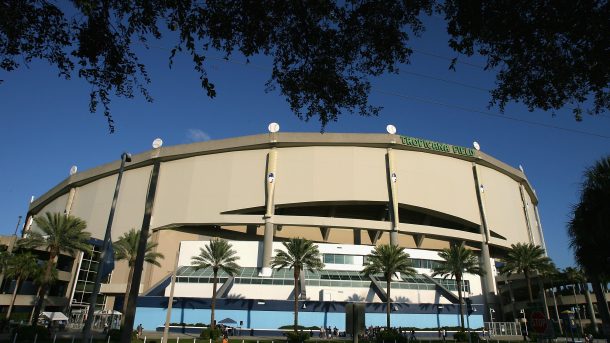 A Florida sheriff is loudly complaining about a Tampa Bay Rays tweet about Breonna Taylor. And he’s threatening to withhold sheriff’s department services from the team in retaliation.

Last week, on Opening Day, the Rays made a series of racial justice-themed tweets, starting with one that said “Today is Opening Day, which means it’s a great day to arrest the killers of Breonna Taylor.” They followed that up with a tweet about how the organization has committed $100,000 to local groups fighting systemic racism. They ended with a tweet that said “Systemic racism is real. Let’s unite for positive change,” with a graphic showing a timeline of America’s 246 years of slavery and 89 years of segregation.

Sheriff Bob Gualtieri of Pinellas County, Florida — the county in which the Rays and Tropicana Field are located — is hopping mad about the Rays tweet about Breonna Taylor. The Tampa Bay Times reports that this past Sunday he called Rays president Matt Silverman to complain and, in so doing, threatened that he may pull his officers from duties in and around the stadium, including traffic control and guarding the room in which the Rays keep concession cash.

Sheriff Gualtieri told the paper, “[t]o turn a baseball event into a political event is uncalled for. It’s just wrong, and it’s improper. It’s just reckless. It’s throwing gasoline on the fire, and it didn’t need to happen.” He added that, in his view, it’s inappropriate for the team to opine on the Breonna Taylor case when team officials “don’t know all the facts.”

St. Petersburg’s police Chief Anthony Holloway — whose officers also provide security services at Tropicana Field, seemed to concur, telling the Tampa Bay Times that he is “very concerned” about the tweet and “disagreed with its characterization of the officers.” Which seems sort of problematic by the Sheriff’s standards, because I can’t see how a Florida police chief can know any more about the facts of the Breonna Taylor case, which is in Kentucky, than the Rays do. He’s reading the stories just like everyone else, right?

The Rays are not commenting. Sheriff Gualtieri, however, told the paper that Rays president Matt Silverman told him that the team’s upper management did not approve the tweet. I would like to think that the Rays are not throwing their own employees under the bus in order to placate an angry Sheriff. I get that they may not want to comment on this, but given what Gualtieri has accused Silverman of saying, one would hope that the team would release a statement standing by it. Especially considering the sentiment expressed in the Rays tweet about Breonna Taylor is completely consistent with its other sentiments about racial justice and the club’s charitable contributions to that end.

As for Sheriff Gualtieri, his response to the Rays tweet about Breonna Taylor is just the latest example of law enforcement officials threatening not to do their jobs because of their displeasure over a private actor speaking out about racial justice. For example, earlier this week a Nevada sheriff told a local library that it should not bother calling 9-1-1 if it ever needs to because the library expressed support for the Black Lives Matter movement. All of this comes after United States Attorney General William Barr said late last year that Americans “have to start showing, more than they do, the respect and support that law enforcement deserves,” and that, “if communities don’t give that support and respect, they might find themselves without the police protection they need.”

While Sheriff Gualtieri may have opinions about what sort of speech is “wrong” or “improper,” one might reasonably argue that it’s far more inappropriate for those whose duty it is to serve the public fairly and equally to threaten that it will not do so if one dares to offend the political sensibilities of the police. Indeed, that’s more than just concerning. That’s downright dangerous.