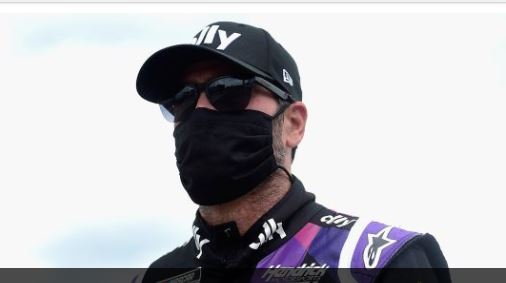 After being absent for last weekend’s Brickyard 400 as a result of testing positive for COVID-19, Jimmie Johnson has been cleared by the medical experts to return to competition, Hendrick Motorsports announced Wednesday morning.

In the next tournament Johnson will drive his No. 48 Chevrolet in Sunday’s Cup race at Kentucky Speedway (2:30 p.m. ET on FS1).

Johnson tested negative twice this week – on Monday and Tuesday – and was cleared by his physician Tuesday evening in accordance with NASCAR guidelines. A Hendrick release said Johnson never experienced symptoms.

Justin Allgaier drove the No. 48 in the Brickyard 400 and finished 37th after being involved in an early crash on pit road.

“My family is so grateful for the incredible love and support we’ve received over the last several days,” Johnson said in a team release. “I especially want to thank Justin Allgaier for stepping in for me at Indy and being a true pro. I’m excited about getting back to business with my team this weekend.”

The No. 48 team will have its regular personnel roster for Sunday’s race.

Sunday’s Brickyard 400 was the first Cup race the seven-time champion has missed in his full-time career, which began in 2002.

Johnson fell from 12th to 15th on the playoff grid after missing Sunday’s race.

It’s been an emotional journey and I’m so happy to be back. Thank you for all the support. This video was one of my favorites and is too good not to share, courtesy of @bigearl48. See you soon @kyspeedway. pic.twitter.com/zFSJiPN2V0