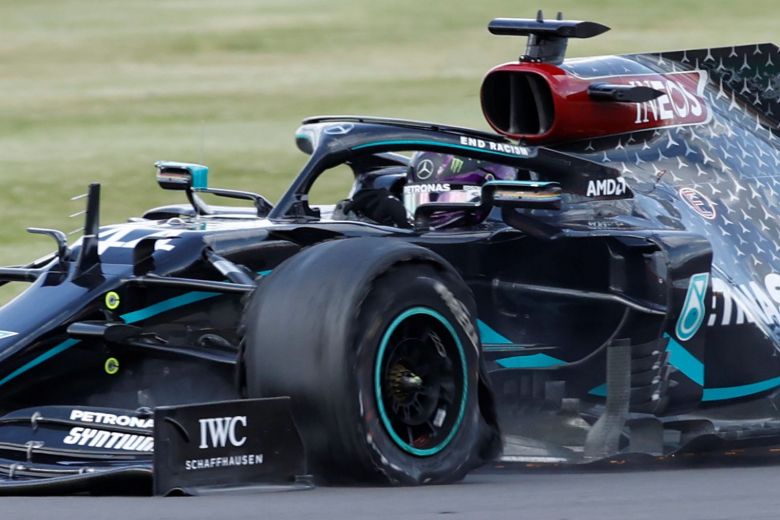 SILVERSTONE, ENGLAND (REUTERS) – Softer tyres and hotter temperatures will pose a fresh test for Lewis Hamilton at Silverstone on Sunday (Aug 9) after the Formula One championship leader won last weekend’s British Grand Prix on three wheels and a flat.

Tyre supplier Pirelli had always planned a change of compounds for the 70th Anniversary Grand Prix, second of two at the circuit where the championship began in 1950, but there will be more scrutiny now.

Hamilton’s win after a last lap tyre failure will go down as one of his most dramatic and came after he completed more than three quarters of the race on a single set.

“One step softer is going to be a challenge for us all and no doubt will move us all to at least a two-stop,” the six-times world champion, now 30 points clear of team mate Valtteri Bottas, said last Sunday.

“Obviously, our cars are a lot quicker this year, we’re using the same tyres as last year, they (Pirelli) weren’t able to develop a better tyre to deal with the forces for this season, so it’s going to be a serious challenge I think.”

Team boss Toto Wolff agreed: “The hotter conditions brought the field closer together last week and the softer tyres will mean more pit stops and more variability with strategy, so we can expect a good fight.”

Hamilton has won the last three races, out of four so far in this Covid-19 affected season, and will start as favourite again.

If he finishes on the podium the Briton will equal the Formula One record of 155 set by Ferrari great Michael Schumacher.

Another win would leave him just three short of Schumacher’s record 91.

Mercedes have won all four races in dominant fashion, with Bottas triumphant in the Austrian opener last month, and rivals recognise the champions are in a league of their own.

They would have had a one-two on Sunday had Bottas not suffered a tyre failure a lap before Hamilton and plunged from second to 11th.

Mercedes’ Lewis Hamilton looks at his tyre after winning the race with a puncture on the final lap.
Related Story
Formula One: British GP tyre problems due to wear on long final stint

“Maybe you find a tenth, or one-and-a-half, OK and we are a bit closer – but it’s not close enough,” said Red Bull’s Max Verstappen.

“You have to be realistic. I mean you can dream, and you can hope, but I think it’s way more important to be realistic because that’s how you move forward,” added the Dutch driver, who finished second on Sunday.

Ferrari will be hoping young Monegasque Charles Leclerc can again get more out of the car than seemed possible after finishing third last weekend.

Nico Hulkenberg looks set for a second chance to start for Racing Point as stand-in for Mexican Sergio Perez, in quarantine after testing positive for the new coronavirus. The German was sidelined by a power unit problem last time.