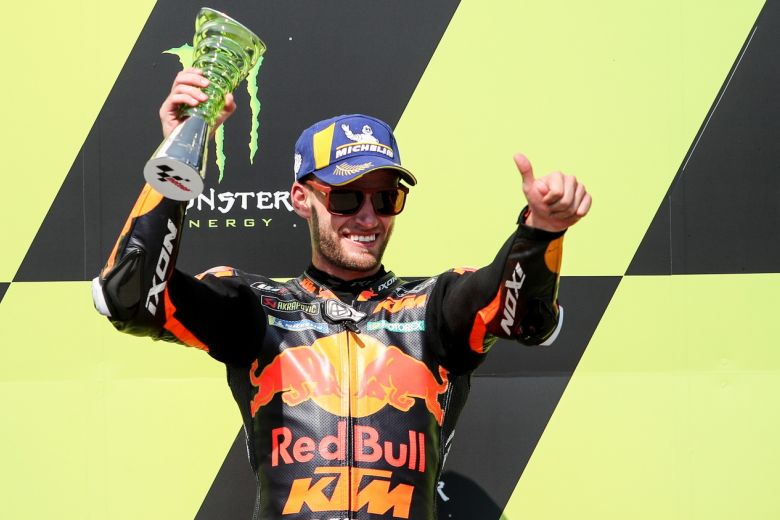 Brad Binder created a series of firsts as he won the Czech MotoGP on Sunday (Aug 9), ahead of Italian Franco Morbidelli on Yamaha’s satellite SRT bike and Frenchman Johan Zarco on a Ducati-Avintia.

It was the 24-year-old’s first MotoGP win in just his third race and it was also a first victory at the elite level by a South African, as well as for the KTM team.

“This was a day I dreamt about since I was a little boy and today it came true,” Binder said.

“My team put an absolutely insane motorbike underneath me this weekend. I had no idea we were capable of winning but I had a feeling it could be good.”

Championship leader Fabio Quartararo finished a disappointing seventh. He won the opening two races of the season in Jerez but struggled for grip on his Petronas Yamaha. .

“Right now I’m lost for words,” he said. “Thanks to everyone for supporting me.

“Hats off to my team, they did an unbelievable job. Hopefully it’s a first of many.”

Morbidelli clung onto second position for his first MotoGP podium, while pole sitter Zarco finished third after a sloppy start on his Avintia Ducati.

“I’m overwhelmed right now and just enjoying the moment,” Morbidelli said. “I saw Brad catching me but I decided not to do anything silly. Now we go to Austria with great joy.”

Zarco expertly held on to podium finish despite being forced to take a long lap penalty after his involvement in a collision that eliminated KTM’s Pol Espargaro.

In a frustrating day for Ducati’s factory team, Andrea Dovizioso finished over 16 seconds off the winning pace in 11th, one place ahead of teammate Danilo Petrucci.

In the absence of world champion Marc Marquez, teammate and younger brother Alex took the last point for Repsol Honda with a 15th-place finish.