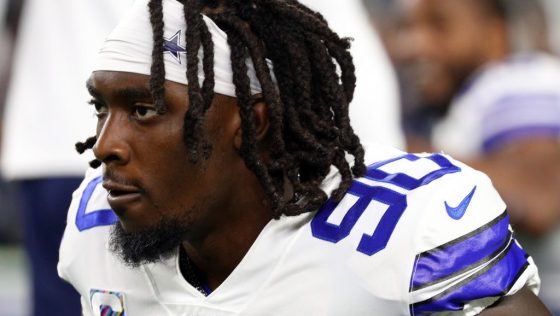 NFL players today have conducted a coordinated social media blitz directed toward the league. They want a safe return to work.

Although no player has opted out so far, Cowboys defensive end DeMarcus Lawrence said he is weighing his options. Lawrence makes it clear he wants to play, but his wife, Sasha, is pregnant and due in October.

“I’m taking it one time at a time, talking with my team and trying to figure out as many details as possible before I make a decision and have it set in stone,” Lawrence told Todd Archer of ESPN. “Shoot, I love to ride with my brothers and play the game of football. When I have to take that away from myself, it’s hard and I don’t want to make a decision like that. But I also have to make sure I’m taking care of my family. Family is No. 1. After the game of football is done, that’s the only thing I have to depend on, so I’ve got to take care of them.”

The Cowboys’ veteran players are scheduled to report July 28.

Lawrence wants questions answered, including how often players will get COVID-19 tests, before committing. Players have until Aug. 1 at 5 p.m. ET to opt out to have their contracts toll for a full year.

So Lawrence would not have to repay any of his $25 million signing bonus, as he told Archer he thought he would, if he opts out by Aug. 1 and honors his contract in 2021. But Lawrence also wouldn’t be paid his base salary or any other payments in 2020 if he chose to sit out.

Lawrence missed the birth of his son in 2014 because of a rookie minicamp and insists football will come second this time around.

“My No. 1 concern is will I be able to see my family and be there for my daughter’s birth?” Lawrence said. “If I can’t be, we’re really going to have to take some major difficult considerations about this season, because I’m not missing the birth of another child.”