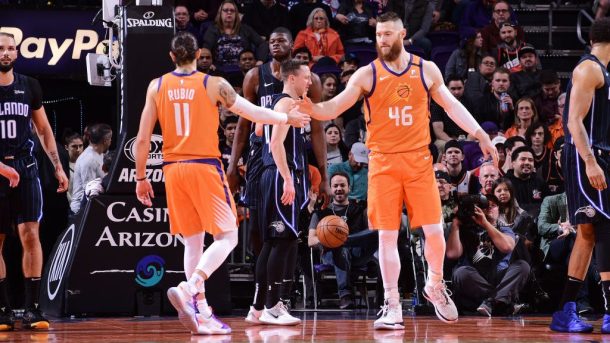 Two Suns reportedly tested positive for coronavirus at least a month ago.

But in a league where at least 54 players have tested positive and many remain anonymous, it’s difficult to match disclosures with previous reports. That’s definitely true of the Suns, who reportedly had a third player – Elie Okobo? Jalen Lecque? – test positive.

Phoenix Suns center Aron Baynes (@AronBaynes) tells me on @Stadium that he tested positive for coronavirus and opens up about how virus has impacted life for over a month for him, his wife and kids: pic.twitter.com/v2LDwpsZ89

Duane Rankin of The Arizona Republic:

Ricky Rubio just said he had tested positive with COVID-19 and that Tuesday was his first practice. #Suns

Ricky Rubio chose not to reveal when he tested positive, but said his family was in Spain while he was in Phoenix. #Suns

Ricky Rubio back, Aron Baynes not as they’ve tested positive for COVID-19.

Hopefully, all these players are OK.

Phoenix is in the mix for for the final playoff spot in the Western Conference, but only barely.

Rubio goes a long way in giving the Suns a chance. His savvy play has solidified a team that was totally deficient at point guard last season.

Baynes is another veteran contributor who has boosted Phoenix’s rise. But at least the Suns have Deandre Ayton at center if Baynes remains unavailable.

Okobo and Jevon Carter have been splitting backup point-guard duties. Carter can handle those if necessary. A raw rookie, Lecque is in line for more playing time if (when?) the Suns fall from the playoff race.