Raptors prove they’re in the frame 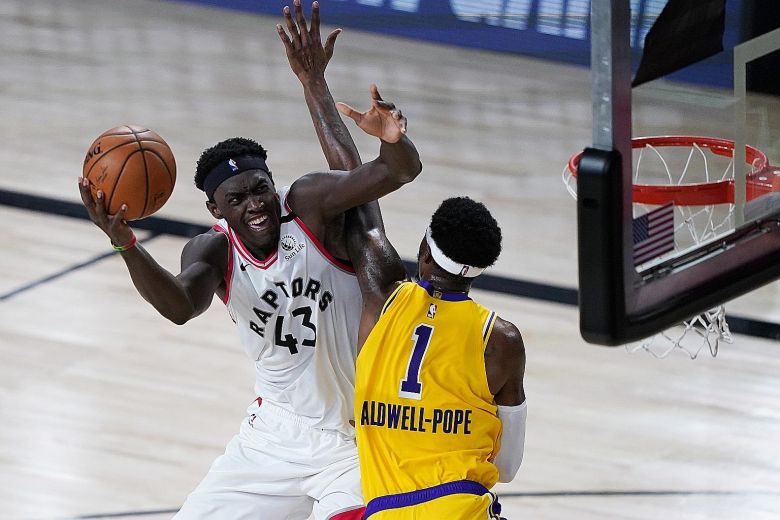 ORLANDO (Florida) • All the talk has been of a potential National Basketball Association (NBA) Finals match-up between the league’s leading teams, the Milwaukee Bucks and the Los Angeles Lakers.

That suits the Toronto Raptors just fine. The Canadian team were similarly overlooked en route to their first championship last year and opponents will learn the hard way if they continue to underestimate them.

After the Lakers (50-15) suffered their second loss in two match-ups this season, falling 107-92 to the Raptors at Disney World on Saturday, LeBron James believes they have to be included in the title conversation.

He paced his team with 20 points and pulled down 10 rebounds, while teammate Anthony Davis added 14 points. But Los Angeles had their worst shooting performance of the term, hitting 35.8 per cent from the floor and making just 29 of 82 shots.

Toronto put on a smothering defensive display, holding the Lakers to just 25 per cent or 10-for-40 from three-point range, while on the offensive end, Kyle Lowry led all scorers with 33 points to leave James thoroughly impressed.

The three-time NBA champion, who is hoping to lead his team to their first championship since 2010, said of the Raptors: “It’s a great team.

“They won a championship for a reason. It wasn’t just all solely because of Kawhi (Leonard) and obviously, you see that.

“They’ve got the two-headed monsters in Fred (VanVleet) and Kyle that set the tone. Their wings are extremely good in Pascal (Siakam) and OG (Anunoby).

“They’ve got experience in the front court at the centre position in Marc (Gasol) and Serge (Ibaka) and then they’ve got a bunch of complementary guys. That’s why they’ve been the team they’ve been all year.”

The forward also told ESPN: “No ifs, ands or buts. Exceptionally well-coached and championship DNA, you can never take that away from a ball club if you win a championship.

“And even before that, they just got playoff-tested guys. The media may not give them as much credit because Kawhi is gone, but players know what type of team they are.”

Seriously man, we love to play the games and we like to compete. We know we’re tough to beat, we really do, and there’s a ceiling we can get to yet.

NICK NURSE, coach of the NBA title holders Toronto Raptors, on his often under-rated side.
VanVleet, who scored 13 points, told cable channel The Sports Network his teammates had a chuckle after critics discounted them as a middle-of-the-pack team following Leonard’s departure to the Los Angeles Clippers.

“It was almost laughable for us,” he said. “We’re not used to getting pats on the back or flowers so it’s not really that different for us.”

The underdogs tag steeled their mentality during last season’s championship run and they are relishing flying under the radar again ahead of the post-season later this month.

“Seriously man, we love to play the games and we like to compete,” said Raptors coach Nick Nurse, whose team are second in the Eastern Conference, trailing only the Bucks (54-12) with a 47-18 record.

“We know we’re tough to beat, we really do, and there’s a ceiling we can get to yet.”

In the other key games of the day, Paul George contributed 28 points and Leonard added 24 as the Clippers defeated the New Orleans Pelicans 126-103, while T.J. Warren scored 53 points to power the Indiana Pacers to a 127-121 victory over the Philadelphia 76ers.