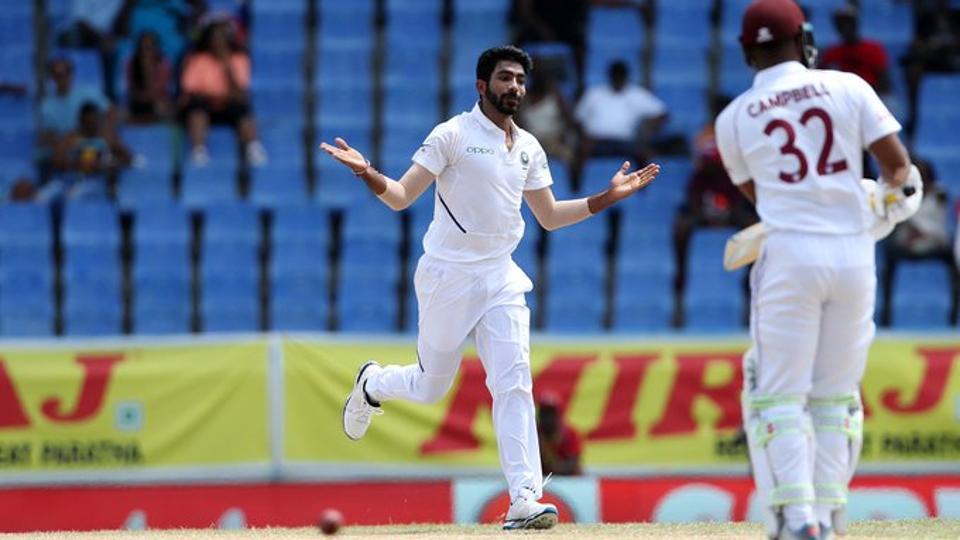 West Indies were set a target of 419 and well, there was never really hope of them overhauling the target against a rampant and relentless Indian attack. Their best bet was to dig in and play for time and take one session at a time. However, all such theories were tossed away by Jasprit Bumrah as he blew away the top order and returned with figures of 5 wickets for 7 runs as India decimated West Indies to complete a historic win by a margin of 318 runs.

Speaking to Rohit Sharma at the end of the match, Bumrah spoke about how he made use of the conditions on offer and forged his plans accordingly.

ALSO READ: Jasprit Bumrah reveals how he planned to decimate Windies’ batting along with Ishant Sharma

“ We had a big score to defend and hence, we tried to be aggressive up front with the new ball. I was bowling with the breeze and the conditions were extremely good to get outswing. I was just trying to get the ball in good areas and was confident of getting the desired results,” Bumrah told in a video posted by bcci.tv.

The other star performer of the match was vice-captain Ajinkya Rahane. The right-hander shrugged off his lean patch with a superb match. He had scores of 81 and 102 in the two innings and was the architect of India’s triumph. He spoke about he was focused on bailing India out of trouble in the first innings and then seeking personal milestones.

“Very satisfied with the effort. For me, the first innings was very crucial. Team’s situation too was not very good. There was a lot of talk about me not getting big runs, not converting 50s into 100s. However, when I walked out to bat in the first innings, my initial intention was to put the team back on track and then look at personal milestones,” Rahane said in the video.

He also said that in the second innings, there was a lot of time to bat and hence, he was looking to face a minimum of 200 deliveries and plan out his innings.

“In the second innings we had a lot of time to bat which worked well. I was aiming to settle down and then bat for 3 sessions and play a minimum of 200 deliveries and yes, because of facing 200 balls, I was able to notch up my century. Dedicate this innings to those people who supported me when runs were not coming,” the vice-captain told Rohit in the video.