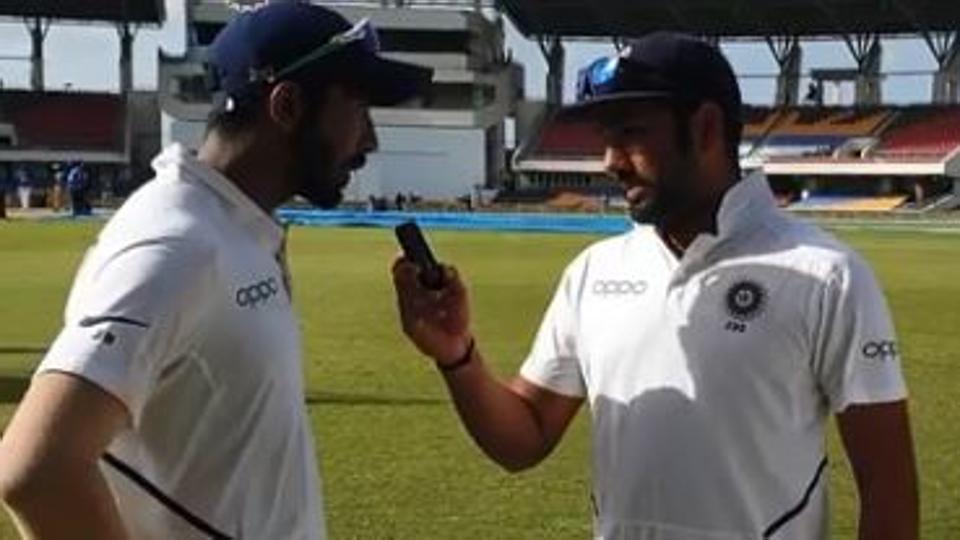 India cricketer Rohit Sharma donned the hat of an interviewer and put up couple of questions to pace spearhead Jasprit Bumrah after the latter starred in India’s convincing victory against West Indies in the first Test of two-match series in Antigua. Bumrah ended the second innings with outstanding figures of 5/7 as India bundled out Windies for just 100 runs to win the match by 318 runs.

Following India’s victory, Rohit tried his hands at becoming a journalist in a video uploaded on BCCI.TV and asked Bumrah: “You made the ball move away from the batsman which isn’t your natural tendency. We generally see you bowling from wide of the crease and make the ball come into the batsman. But today (Monday), the batsmen were getting beaten outside the off-stump. So, have you worked on that or were you just trying to take the help of breeze for movement?”

Bumrah replied: “I always try to use out-swingers as much as possible but tried harder today because of the breeze. I had use out-swingers a lot in England so that helped my confidence. I was also mixing (deliveries) around a bit to confuse the batsmen

“Jassi took 5/7 and it was a magical spell from him,” Rohit signed off Bumrah’s part of the interview.

Bumrah, who took his five wickets in eight overs, rattled through the top order, attacking the stumps relentlessly in a devastating spell. He laid a marker when he had Kraig Brathwaite caught behind for one in the first over and after a mere blink of the eyes, West Indies were reduced to 15 for 5 and the result was already a foregone conclusion. With this deadly spell, Bumrah scripted an amazing record – Bumrah’s figures, which is the cheapest five-wicket haul by an India bowler in Test history.

Also, he has four 5-wicket hauls and what makes this feat memorable is that all have come in four different tours so far – South Africa, England, Australia, and now the West Indies. He is the first India bowler, and also the first bowler from Asia to take a five-wicket haul in each of those four countries. And well, just so that we marvel at his stunning feat, he has done it all in his very first tour to all these countries.