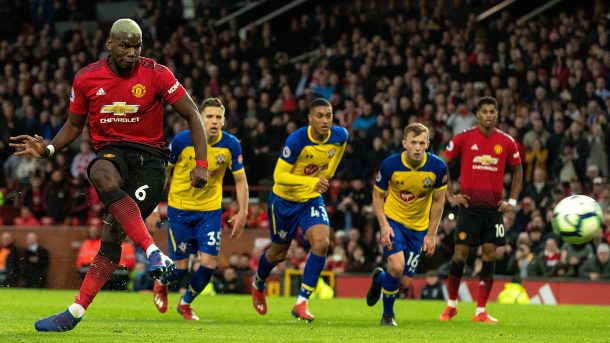 The door to third place is wide open for Manchester United when Southampton visits Old Trafford on Saturday (Watch live at pm ET on NBCSN and online via NBCSports.com).

Chelsea’s weekend loss and Leicester City’s place on United’s docket means Ole Gunnar Solskjaer’s in-form men control their own destiny when it comes to finishing as high as third on the table.

Southampton, for its part, can harbor outside hopes of a Europa League place, currently six points back of eighth place before Arsenal and Spurs play Sunday.

Phil Jones and Axel Tuanzebe remain the only absences for Manchester United.

Moussa Djenepo, Sofiane Boufal and Yan Valery are out for Saints and may not return this season, but Jannik Vestergaard could be back and gunning for a second goal against the Red Devils.

Paul Pogba about what’s changed at Old Trafford: “We play more as a team than we did before, we enjoy it even more, we defend together, we attack together, and this team is stronger as well. The players who are on the bench or who don’t play every time, when they come on they help the team so the mentality is good and is right. All this together has put us where we are today.”

Ralph Hasenhuttl on improving Saints: “We want to be braver, but that can sometimes cause you problems, like against Arsenal when we make some mistakes. We need this decision making, because then we learn. If you don’t demand this, you cannot improve in this way. …In every regard you must get better. In this moment it looks like we can make this step, and the players are open-minded to go this way. This is important, otherwise you will always stay on the same level.”

Saints are tied with Burnley as the biggest underdog of the weekend at +1050, but you see how that turned out for Nick Pope and the Clarets. United is a minus-375 favorite.

Can anyone slow United? Saints have already claimed a big win against a Mancunian power… and this would be a big moment for Hasenhuttl’s project. The teams are on the same amount of rest and all things equal you’d like the hosts to boot. United 2-1.