Fox will put virtual fans in the stands for its broadcasts 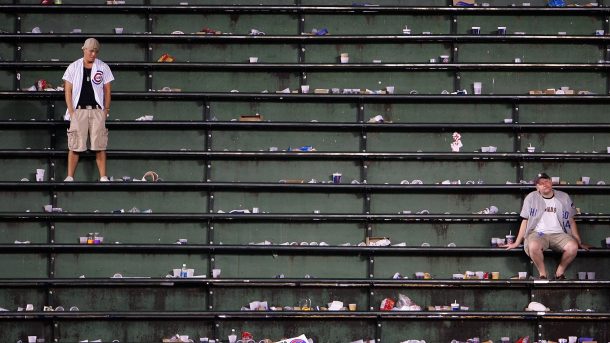 Virtual fans on a baseball broadcast? Yep, that’s gonna happen. We’ll get to that in a second. But first, I want to talk about what I think it all means in a larger sense.

Back in 2014 Sports Illustrated ran an article in which it imagined what the baseball stadiums of the future would look like. They had help with it from Populous, the ballpark architecture firm. It had monorails and stuff so, yeah, it had a bit of that silly utopian flair that almost all “[Whatever] of the Future” pieces have, but there was one thing about it that rang very true and may have been pretty damn prescient: a drastically reduced number of fans.

The idea: with sports revenues becoming less and less dependent on gate receipts compared to sponsorships, TV, and subsidiary investments like real estate, the need for 30,000 or 40,000 fans in seats will not be as great. Rather, you could drastically reduce seating capacity, make the seats that do remain into extreme luxury products that sell for top dollar, and rely mostly on that. One result of it will be that you don’t have to build walls for the stadium and you can, instead, leave them open to the city streets or to parks or green spaces where people can just look into the place for free. It’s OK because you’re making oodles on TV and the luxury seats and you’re saving oodles on the real estate footprint, labor for the park, etc.

I have no idea how feasible that is. In 2014 I was pretty skeptical that MLB and its owners would forego making even a thin dime if they didn’t have to, so selling them on the notion of letting passersby simply gaze into the ballpark without paying anything was unlikely. I’m still skeptical of it as least as far as stadiums being open to public spaces that aren’t also massive revenue-generators themselves. Sure, maybe you get rid of the bleachers and the outfield walls, but if you do, you’re going to open it up to a beer garden or something from which MLB and its clubs will draw revenue.

However that would look, the central concept — general admission matters less than luxury admissions and TV and digital rights matter way, way more — is a valid one. The size of ballparks has been going down and some existing parks have removed seats in favor of luxury spaces, common areas, bars, and things like that. The point is, if you can maximize revenue with high dollar luxury seats that way you can probably accelerate the trend. Fans in seats will become less and less important.

Which brings us to baseball in 2020. We have no fans this year for obvious reasons. It’s not ideal for the owners, obviously. They still very much enjoy getting gate receipts, even if I think they overstated their reliance on ticket sales during their negotiations with the players. We’re not yet to “The Ballpark of the Future” and the total and final optimization of the digital and luxury sphere, so yeah, they are going to take a hit now. But as we’ve seen, they are finding ways to make up for the lack of fans.

One way, which was reported in the past few days and which you may have seen if you’ve watched exhibition games, is to put adds on everything that isn’t nailed down. Banners on the seats, holograms on the grass and pitchers mound and everywhere else. This is merely an extension of trends we’ve seen in recent years, first with the ads on the backstop behind the hitters, some of which are projected onto green screens in order to allow for greater changeover and more targeted advertisements. We have seen MLB dip its toe into ads on jerseys, which will likely be a fact of life in regular season baseball sooner rather than later. The ads of opportunity now — made possible by empty seats — will become more refined and will fill up more of your TV screen in the future.

Another thing baseball is doing is making up for the lack of ambiance the absence of fans is creating. They’re piping in crowd noise. That’s partially to help the players who have complained about how weird it is to play in a totally quiet, empty park. But it’s also to help broadcasters and viewers at home who may find the silence unsettling. But it’s not just an aural thing. Starting on Saturday, Fox is going to put virtual fans in the seats:

No fans? Not on FOX Sports.

I don’t know what to think of that yet. I suppose people who play sports video games have long been used to it. I also suppose it’ll be fun to find the glitches and oddities in the fake fanscape if the game ceases to be entertaining.

I also wonder, though, how long it will be until Fox and Major League Baseball can monetize the virtual fans in ways they can’t monetize real fans. What ads will be on their fake shirts? How many closeups of those fake fans wearing ads be in a game? How much will some people pay to have themselves digitally rendered right behind home plate every night? Marlins Man would probably give baseball a blank check, would he not?

Anyway, it’s gonna be weird. But virtual fans also, I suspect, are a baby step on the road to future baseball in which in-person fans are an increasingly low priority.

Minnesota Twins Roster and Schedule
Ok, how about the Baltimore Blue Jays?