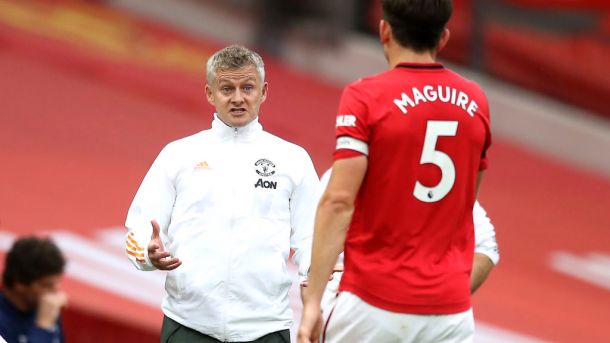 Manchester United want to ‘dominate’ Leicester City in their epic season finale at the King Power Stadium on Sunday (start time, 11am ET on NBC and online via NBCSports.com).

Ole Gunnar Solskjaer and his side know a draw will be enough to seal a top 4 spot and Champions League qualification, but Leicester know a win will instead see them secure a Champions League spot and Man United will have to sweat on Chelsea getting beat at home by Wolves to finish in the top four.

Speaking to the media ahead of the game, Solskjaer was fired up and was adamant Man United will not play for a draw as they aim for a top 4 finish.

“We’re looking forward to the game; we’ve given ourselves a good chance of being in the Champions League next year,” Solskjaer said. “We can’t go into a game thinking about what the outcome could be. We just have to go and perform, and perform to a high enough level for us to get a result. We want to go there and dominate the game – we wanted to get to this position, having to go Leicester to need to beat them. We’re not going to change our approach. We want to go there to try to win the game.”

This is the correct approach from Manchester United.

They have improved defensively throughout the season but there’s no doubt they’re much better when they are attacking and using Marcus Rashford, Anthony Martial, Mason Greenwood and Bruno Fernandes in the final third.

Leicester will try and sit back, soak up pressure and use Jamie Vardy on the counter to stretch Man United and Solskjaer’s side have shown they struggle to break down teams sitting in a 5-4-1 formation. That has changed a bit since Fernandes arrived but with several of United’s star attackers looking jaded — most noticeably Rashford, Fernandes and Paul Pogba — it is up to Solskjaer to get them focused for one more game.

If Man United play for a draw at Leicester, it’s a heck of a risk as one small error will cost them dear. Solskjaer has to go all out for the win and if they score a few early, it will be game over. Everyone is expecting Man United to get the point or win they need so there’s no pressure on Leicester.

That is very dangerous for Manchester United.