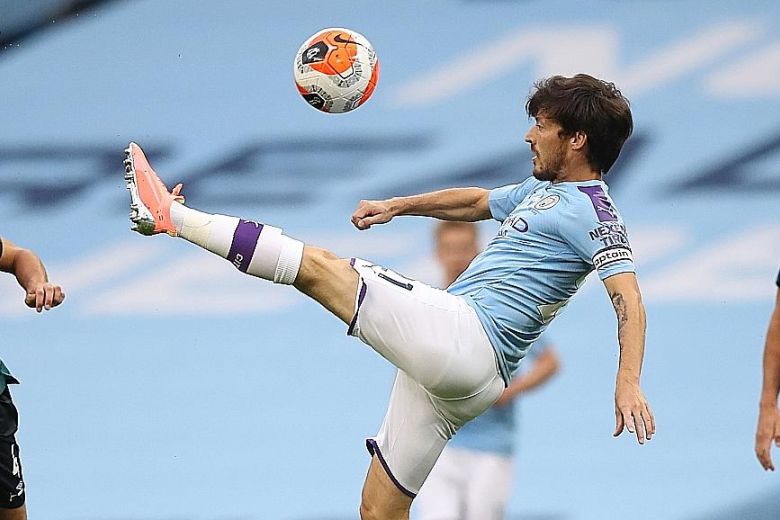 LONDON • Kevin de Bruyne is hoping to crown David Silva’s glorious 10 years at Manchester City by completing the Spaniard’s set of medals with a Champions League win next month.

Silva has won four Premier League titles among 14 trophies since joining City from Valencia in 2010. He has also won the World Cup and two European Championships at international level with Spain.

The midfielder has never tasted Champions League glory but he has one last chance with Pep Guardiola’s team, with his contract ending at the end of the season.

City resume their European campaign at home to Real Madrid on Aug 7. They hold a 2-1 lead from the first leg of their last-16 tie, with the winners progressing to the quarter-finals, which will be held at a neutral site in Lisbon.

De Bruyne scored twice in Silva’s final Premier League game as City thrashed Norwich 5-0 on Sunday and labelled his midfield partner one of the best players to ever play in England.

“You can always debate who is (number) one but when you play with him you can appreciate what he does day-in, day-out. I have played with him for five years, a long time,” said the Belgian.

“He is going to be a big miss. It would be great if we could win the Champions League so it could end well for him.”

City have scored four or more goals in six of their 12 games since English football’s restart last month and de Bruyne is hoping to carry that form onto the European stage.

“It is good to stay in the rhythm. There is no point slacking. We have to keep going full pace,” he said.

According to The Telegraph, City are planning to play a closed-door friendly this weekend in preparation for their match against the newly-minted La Liga champions.

Guardiola revealed he would analyse Real’s 11 league matches since Spanish football resumed, only one of which they failed to win, plus games they have played this term without captain Sergio Ramos, who is suspended following his red card in the first leg. Real forward Mariano, who was unlikely to face City, has also been ruled out after testing positive for Covid-19, the club said yesterday.

Silva is hoping his swansong will not come against Zinedine Zidane’s men but knows it will soon be time to say goodbye.

“I could not imagine when I came here, to win so many titles and the way we won it,” said the 34-year-old, who has made 434 City appearances in all competitions, scoring 77 goals.

“I have been working with the players and I love all of them. I am going to miss everything – even the weather!”