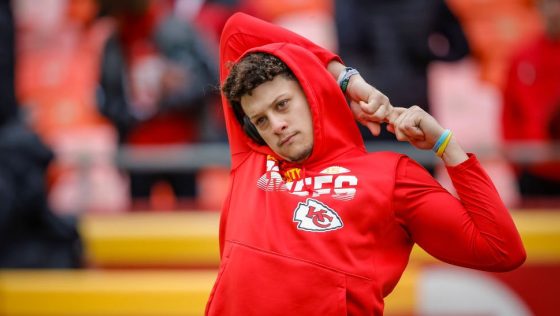 When sitting atop the NFL’s mountain, it often can be hard to find motivation. Chiefs quarterback Patrick Mahomes has found some, thanks to the NFL’s annual list of the top 100 players in the NFL.

Mahomes landed at No. 4, behind Ravens quarterback Lamar Jackson (No. 1), Seahawks quarterbackRussell Wilson (No. 2), and Rams defensive tackleAaron Donald (No. 3).

Mahomes took notice of the outcome, tweeting an emoji of a pencil and a notepad.

While he’s clearly not the fourth-best player in the league, the placement is understandable, given the mechanics of the process that generates the annual list. During the preceding season, a supposedly wide swath of players are asked to list the top 20 players in the NFL. During the 2019 season, Mahomes didn’t have the same sizzle that he had in 2018, thanks in large part to the fact that he missed multiple games with a knee injury.

Indeed, Jackson and Wilson spent much of November and December jockeying for MVP votes, with Jackson emerging as the clear-cut choice when the Ravens nailed down the No. 1 seed in the AFC, fueled by a 14-2 record. Jackson became the unanimous MVP, and the near-unanimous All-Pro quarterback.

But those nuances easily get lost in a list compiled before Mahomes sparked the Chiefs to their first Super Bowl win in 50 years and unveiled as training camps open. The end result is a perceived slight of Mahomes, and it surely will give him a healthy kick in the butt at a time when kicks in the butt would otherwise be hard to find.

Not that Mahomes needed a kick in the butt, but his reaction proves that it can’t hurt as the Chiefs try to avoid the various dynamics that have prevented a team from repeating as Super Bowl champion since the Patriots won two in a row between 2003 and 2004.