‘Asking Srinath to bowl another over would’ve been embarrassing’: Anil Kumble recalls ‘Perfect 10’ against Pakistan 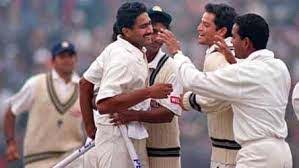 On February 7, 1999, India’s Anil Kumble became only the second man in history of Test cricket to take all 10 wickets in an innings. What made the epic feat even more special was that it came against arch-rivals Pakistan, after the team was 0-1 down in the series. On Day 4 of the second Test match at the Feroz Shah Kotla, Kumble ran through Pakistan’s batting order, bowling them out for 207 and helping India to a 212-run win.

Kumble revisited his special day, recalling what went through his mind as he closed in on taking the 10th Pakistan wicket. The sight of Javagal Srinath famously running in and bowling wide outside off to ensure Kumble picked up his 10th is etched in the minds of every Indian fan. However, with his Karnataka teammate bowling at the other end, Kumble revealed how he knew he had to pick up the wicket in the next over and here’s the reason why.

“After tea, I got 7, 8 and 9. And finished my over and Javagal Srinath had to bowl one, that was probably the toughest he had to bowl,” Kumble told Pommie Mbangwa during an Instagram chat.”

“He had to unlearn all his skills and bowl wide. But I didn’t ask him, believe me. I thought, ‘Let’s give Wasim a single.’ But I thought I had to get one that over, because it would have been embarrassing to ask one more. I was just destined. One down in a series, against Pakistan, just so special.”

India lost to Pakistan narrowly by 12 runs in the first Test in Chennai, so the onus was on the home team to win and square the series. Chasing 420 to win, openers Saeed Anwar and Shahid Afridi had put on 101 for the opening wicket. Mohammad Azharuddin, the Indian captain, had Kumble bowl non-stop between lunch and tea and once the former leg-spinner broke the partnership to get his first wicket, he didn’t stop until he got the remaining nine.

“It’s like it’s happened yesterday for me. It was special. It was pressure because Pakistan came to India after so long. We had to win at Kotla to square the series. I think I am most effective when the wicket is two-paced and there is uneven bounce,” Kumble said.

“Till lunch, Pakistan had got off to a great start. I knew it was a matter of one wicket. After lunch, I changed ends. I got 1, then 2, and then it went on and on. I bowled non-stop from lunch to tea, but I was getting tired. I knew I had a great chance to better my previous best because I was six on six.”