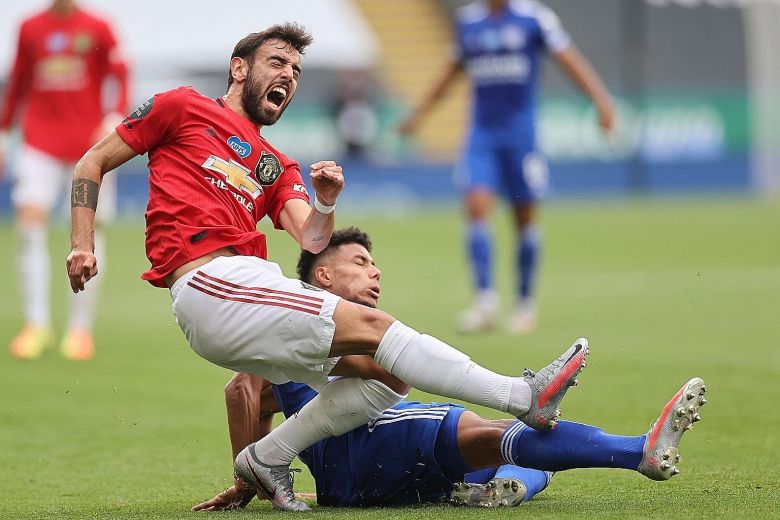 With Marcus Rashford, Anthony Martial and Mason Greenwood scoring more than 60 goals, United have the most potent strike force in England this season. It was Greenwood the livewire who pickpocketed the ball in midfield before Martial was fouled by Wes Morgan, leading to the penalty.

Fernandes, who had threaded the Frenchman through, has been inspirational but there remain doubts over Paul Pogba’s defensive discipline in a 4-2-3-1 system alongside Nemanja Matic. Leicester’s Wilfred Ndidi and Wolves’ Ruben Neves are possible targets to replace the Serb.

Then there is the question whether Ole Gunnar Solskjaer sticks with David de Gea as his starting goalkeeper? The goalkeeper was abject in the their FA Cup semi-final defeat by Chelsea but for all of his high-profile blunders, they still boast the best defensive record outside the top two.

Yet United rode their luck against Leicester – Jamie Vardy was allowed space during a set piece to glance a header onto the woodwork on the hour mark – and could do with a top centre-back such as Napoli’s Kalidou Koulibaly.

The good news is United’s Champions League qualification could give them an edge in the transfer market in terms of the $150 million or so they will receive from Uefa, and added pulling power.

The Europa League place went to Tottenham, who held Crystal Palace to a 1-1 draw at Selhurst Park to leapfrog Wolves into sixth position on goal difference.

Wolves can still qualify for the Champions League if they win this season’s Europa League, or make it into the Europa League again if Chelsea lift the FA Cup next weekend.