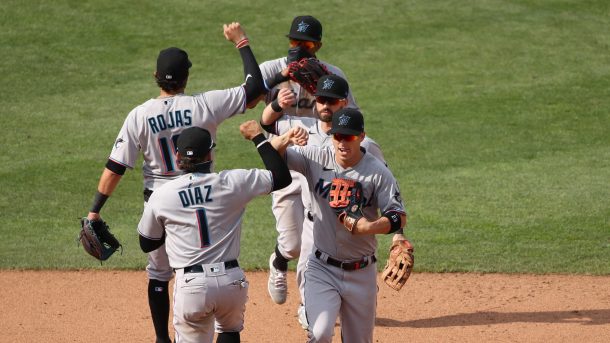 Here’s some more fallout from the Miami Marlins outbreak: Major League Baseball is going to start thinking about how to enforce safety recommendations.

Major League Baseball made a lot of noise a couple of months ago about how great its anti-COVID-19 protocols were. About how detailed and thoughtful and proactive their plan would be, such that no man could say that they were being irresponsible about returning to play in the middle of a pandemic.

Except the plan had a slight problem: nothing in the plan explained how the league would handle a coronavirus outbreak. It made no provision about what to do if a certain number of players on a given team tested positive, let alone the number of positive tests that would be required to shut a team down. It also said nothing about what, exactly, teams can or should do to ensure compliance with the 113-some-odd pages of rules it laid down about player deportment.

Now, after the Marlins outbreak — after two teams’ schedules have been suspended and over half of one of those teams’ rosters is out of commission — Major League Baseball is getting around to dealing with that. From Jeff Passan at ESPN:

Following the coronavirus outbreak that infected nearly half of the Miami Marlins’ roster and prompted the temporary suspension of the team’s season, Major League Baseball is encouraging players not to leave hotels in road cities except for games, mandating the use of surgical masks instead of cloth masks during travel and requiring every team to travel with a compliance officer who ensures players and staff properly follow the league’s protocol, sources told ESPN.

Passan doesn’t say who the compliance officer will be or should be. Whether it’s a player, a trainer, a front office employee, or a new staffer altogether. But I think that matters and I’d be curious to know what teeth, if any, the job would have to actually enforce things.

I say this because, in the wake of the Marlins outbreak, some have cited the lack of veteran leadership on the team as a reason things got so bad. If that kind of thing is going to be cited as significant — if you’re relying on the typical sort of unwritten rules enforcement that teams use for all other matters of clubhouse deportment — no “compliance officer” is going to make any headway. If teams don’t take this sort of thing seriously and if there is no actual punishment in place for unsafe behavior, players are going to police themselves, or not police themselves, in the same ways they always have.

Speaking of the Marlins outbreak, Bob Nightengale of USA Today dropped this little bit this morning:

MLB has yet to determine whether the Marlins players will be paid for the postponed games if they are unable to play every game in the 60-game season, but will pay the Philadelphia Phillies, New York Yankees and Washington Nationals for games missed because of the Marlins’ outbreak . . . The March 26 agreement states that players will receive prorated pay only for the number of games their teams play, but MLB made an exception for the Nats, Phillies and Yankees since they weren’t responsible for the postponed games.

Which is to say that the Marlins might be punished for getting sick. Which, based on the sentiment I’ve seen online, is OK with a lot of people because of rumors about irresponsible behavior the team engaged in that led to their outbreak.

The problem, though: (a) that behavior has not been confirmed in any way, it’s just rumored; and (b) even if some people on the club did do unsafe things that led to their infection, it’s doubtful everyone did, so punishing those who were not involved and who merely got infected because they shared a clubhouse or a bus or a plane with those who were is kind of a problem. And, that aside, MLB, we must reiterate, had no mandatory or enforceable guidelines which actually governed the players’ behavior and there was no one in place to ensure compliance with the league’s suggestions.

Which is to say, MLB instituted a system based on recommendations and trust and now it is considering docking the pay of not only those who may have not followed those recommendations, but everyone who was infected by their irresponsible behavior. Talk about passing the buck.

Anyway, kudos to Major League Baseball for now, a week into the season and months into their plan to resume baseball, finally thinking about ways in which to deal with the global pandemic into which it has thrust itself beyond the merely theoretical. I hope they do come up with something. Better late than never, right?